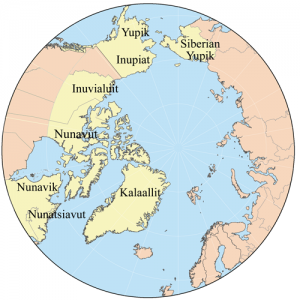 Founded in 1977 by the late Eben Hopson of Barrow, Alaska, the Inuit Circumpolar Council (ICC) has flourished and grown into a major international non-government organization representing approximately 155,000 Inuit of Alaska, Canada, Greenland, and Chukotka (Russia). The organization holds Consultative Status II at the United Nations Economic and Social Council and is a Permanent Participant at the Arctic Council.

To thrive in their Circumpolar homeland, Inuit had the vision to realize they must speak with a united voice on issues of common concern and combine their energies and talents towards protecting and promoting their way of life. The principal goals of ICC are, therefore, to

ICC holds a General Assembly every four years at which Inuit delegates from across the Circumpolar region elect a new Chair and an Executive Council, develop policies, and adopt resolutions that will guide the activities of the organization for the coming term. The General Assembly is the heart of the organization, providing an opportunity for sharing information, discussing common concerns, debating issues, and strengthening the bonds between all Inuit.
The ICC international office is housed with the Chair and each member country maintains a national office under the political guidance of a President.

In 2017, ICC celebrated its 40th anniversary and produced a short video reflecting on and celebrating the 40 years history of the organization.

History and Beginnings of the Organization

In 1973, several Greenlandic organizations based in Copenhagen hosted the first Arctic Peoples Conference. They invited members of the then Inuit Tapirisat of Canada (now known as Inuit Tapiriit Kanatami), the National Indian Brotherhood of Canada, and Saami from northern Finland, Norway and Sweden. Because neither Alaskan nor Russian Inuit were able to attend that event, the need for Inuit to meet as one indivisible people became clearly evident at that meeting.

Inuit visionaries such as Mayor Eben Hopson of the North Slope Borough, Alaska, were among those that never let go of the idea. When, in 1975, the World Council of Indigenous Peoples held its founding conference in Port Alberni, British Columbia, he had his special assistant, Billy Neakoq, deliver an invitation to a pan-Eskimo gathering to be held some time in the near future.

Planning, fundraising, and focused attention to this goal began in earnest. A grant submission made to an American foundation in 1975 contains the following statements: We Eskimo are an international community sharing common language, culture, and a common land along the Arctic coast of Siberia, Alaska, Canada and Greenland. Although not a nation-state, as a people, we do constitute a nation.

Inuit from Canada, Greenland, and Alaska discussed their common vision when Eben Hopson hosted the first ever the Inuit Circumpolar Conference in June of 1977.

At that historic and celebratory meeting, political resolutions were passed, poetry was read, and songs were sung. All 54 delegates (18 from each country) agreed to found an organization to carry on the task of working together on an international basis. The celebratory mood in 1977 was only dampened by the absence of Inuit from the former Soviet Union, whose arrival would have to wait several years.

The Bill Edmunds Award is the highest award ICC presents to an Inuk during its General Assemblies. This award was established by ICC to honor those individuals who have made a selfless contribution to the promotion of Inuit rights and interests, with a particular focus on international endeavors.

At each General Assembly, delegates elect a Chair to serve a four-year term. The Chair rotates among Canada, Alaska, and Greenland.

Sara Olsvig is the ICC Chair.

International Chair of Inuit Circumpolar Council Sara Olsvig is a Ph.D.-candidate at Ilisimatusarfik, the University of Greenland. Sara Olsvig served as member of the Parliament of Denmark (2011 – 2015) and the Parliament of Greenland (2013 – 2018). She has been leader of the political party Inuit Ataqatigiit. Olsvig was Vice Premier and Minister of Social Affairs, Families, Gender Equality and Justice in the Government of Greenland from 2016 to 2018. Olsvig was member (2011 – 2014) and Chairperson of the Standing Committee of Parliamentarians of the Arctic Region from 2013 to 2014. Olsvig is an appointed member of the Constitutional Commission of Greenland, and member of the Human Rights Council of Greenland. Olsvig holds a MSc in Anthropology and has previously worked as Executive Director for Inuit Circumpolar Council Greenland, to which she today is a delegate. Sara Olsvig lives in Nuuk, Greenland with her partner and their children.

The Executive Council is made up of the Chair, 1 Vice-Chair and 1 Member from each country (Alaska, Canada, Greenland and Chukotka). The Council is elected by their respective country delegation at the General Assembly to serve a four year term. The Council is responsible for providing direction to the ICC offices and implementing the Declaration mandates as directed by the delegates.